Nina, the facilitator, held up a tightly bunched, white and crimson salad vegetable and invited guesses.

‘Some kind of radish?’

Two different cooking classes are now underway at the Oxford Academy, a bold innovation from LEAP project, in partnership with Good Food, Oxford. Researchers from LEAP will cook alongside participants and use the opportunity to discuss their own work while learning more about people’s views on eating meat, health and the environment. First up were Christina Potter, who is currently investigating behavioural interventions to encourage people to make healthier and more environmentally sustainable food choices, and Mike Clarke, who works on modelling the food system. The Tuesday night sessions focus on introducing cooking with more vegetables to older men, a demographic who typically eat the most meat, while the Wednesday evening classes are aimed at parents and carers.

I joined the men’s cooking class on Tuesday 26th March 2019. There was a strong turn out of eight participants with three volunteers on hand to help. There were very different level of cooking experience with some of the men having previously done entire roast dinners while several had never done more than assemble a simple breakfast.

After a briefing from Nina and an experimental munch on a leaf of chicory to test its bitterness, we were off and everyone got stuck in chopping peppers, courgettes, potatoes and carrots to roast in the oven. I learned to roast a butternut squash without removing the peel, which candies deliciously in the oven. A time-saving winner! 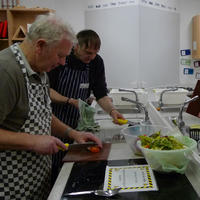 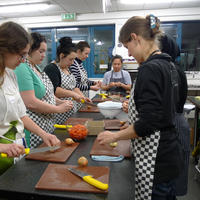 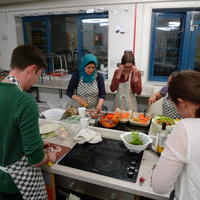 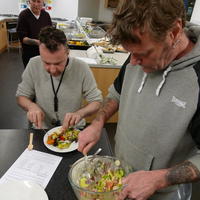 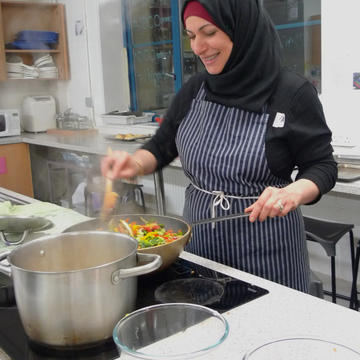 It was great chatting to the men in order to learn a bit more about how they cooked and what worked for them. John confided that he would happily be vegetarian but as he and three friends often cooked together he didn’t think this would go down well with them.

Motivation for joining the cooking with more vegetables class varied from Roy, who wanted to be able to break out of his cycle of the usual three meals he makes, to John, who cited animal welfare as a reason to focus on a more veg-based diet. Interestingly impact on the environment was barely cited at all as a motivating factor – it will be interesting to see if the course of classes will make some impact on that…

After the roast vegetables had been finished, Nina let us loose on salad making with a variety of ingredients from tahini to agave syrup to make dressings for this by building up with different ingredients. Eating together at the end really generated a sense of group camaraderie and I can highly recommend Steven’s salad dressing!

LEAP teams up with New Scientist on Veganuary experiment!

Vegans 'need to be aware of B12 deficiency risk'

The LEAP conference 2019 – bigger and even better